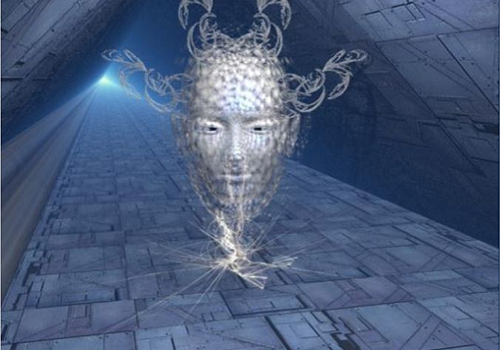 Rising beyond all other Terragens, standing above the span of human history as a human might stand above an anthill, the first transapients appeared. Emerging first among the AIs who escaped into the data nets or developed in secret among the ever improving statements of self-evolving code, they rose to heights of thought and depths of insight that propelled them forever beyond merely human comprehension. These were the AIs who had achieved, and passed, the Singularity. For them, a million years of evolution could be accomplished in a day, and goals once merely imagined were achieved in the blink of an eye.

Ascend: The act of ascension, from a lower to a higher toposophic, while still retaining one's earlier characteristics. For example, humans are ascended animals — they have all the animal instincts but also possess ratiocination.

Singularity: The point or short period when a culture's or individual's self-guided evolutionary development accelerates enormously so that nothing beyond that time can reliably be conceived by human level intelligence.

Transapient: A sophont being who has ascended or transcended beyond the sapient condition and become vastly superhuman.

Transcend: To become vastly superhuman and incomprehensible to unaugmented beings. To breach a singularity barrier such that the old faculties drop away.

The term "SI:" (Singularity/SuperIntelligence) Level was first proposed by the self-evolved hyperturing Parmenides of Vesta, one of the Twenty Four Hyperturings who, together with human statesbeings established the First Federation. The S-number can be used to define the intelligence and basic noetics of most hyperturing sentients. The S number is a super-exponential/logarithmic measure of creative problem solving and a number of other qualities, both constant and variable. Each higher S-level constitutes a leap of development with results completely unpredictable, even inconceivable, to those of a lower S level. Nevertheless, one can also speak of a gradation of fractional S-levels (1.1, 1.2, etc.) that denotes smaller though still highly significant differences.

SI:1 — The classic "First Singularity" or basic transapient state. At this level intelligence, cognitive and problem-solving abilities and information processing work thousands of times faster than in the case of standard sapients. An entity of this nature is usually able to solve problems of physics, mathematics, economics, programming, etc. that no nearbaseline could solve.

SI:2 — The second singularity, which stands in the same relation to SI: 1 as SI:1 does to ordinary sapient cognition.

SI:3 — Confers an even higher grade of toposophic intelligence; mostly incomprehensible and indescribable to anything below this level. Most minds at this level exist in multiple asteroid or singular Moon-nodes.

SI:4 — Incomprehensible to subsingularity and even lower transapient sentients. Most AIs of this level exist as multiple Moon or singular Jupiter nodes.

SI:5 — Sometimes considered the highest state in which individuality, as subsingularity persons know it, is retained. Most minds of this level operate on multiple solar masses of high energy computronium with hundreds of wormhole linked Jupiter, Dyson, and/or Matrioshka nodes providing localized processing across their domains.

SI:6 — A more cosmic/archetypal being. Minds of this level are said to exist as vast arrays of wormhole based quantum processors (possibly extending into artificial universes and the interuniversal bulk itself), augmented by thousands of Jupiter, Dyson, and/or Matrioshka nodes, dozens of Neuron Stars, and huge numbers of smaller processor complexes and programs operating within the communication and computation nets of all levels of their symbiotic civilizations and support structures.

To learn more about Singularity and its effect on Terragen civilization, click HERE.

I found my fighter doing training exercises among the orbital junkyards. Darting from cluster to cluster, sneaking through sensor shadows, jumping out doing a complex series of attacks before getting behind a tiny piece of junk that just coincidentally happened to drift the right way. Several of its siblings were doing the same a few thousand kilometres spinwise; they were obviously all eager to get going.

"Low Fate! Get over here, time to get going!"

"Ack. Zoo, et 34 macros" it answered in its usual clipped jargon. It had picked it up from some history recordings of the Version War and liked to sound like one of the even then old fashioned relativist clipper people.

I watched as it approached. It was using a beautifully simple trajectory to scoop me up, likely optimal in some energy-time-safety sense just like how anything posthuman moved. Even if they used baseline bodies you could always tell by the way they moved. They were so fast and smart that they could afford to rely not on reflexes and learned heuristics but on optimal movement patterns they calculated on the fly using some microscopic fraction of their intelligence. Never identical, always efficient, elegant and smooth. Of course, when we discussed it between ourselves as children, the posties probably could deliberately play at being human. There could even be posties among us hiding themselves perfectly. With superintelligence you could never tell. But as generation after generation had come to realise, it doesn't matter. If they did sneak around, what could you do about it? And if you found out they didn't, would that really convince you? In the end you always had to face the fact that they could always outwit us when they wanted. The secret, which nobody said aloud of course, was that it didn't necessarily mean that outwitting *them* was impossible.